The world's only Bachelor degree programs in Ifá/Òrìṣà knowledge.

We are a team of 26 Ìyánífa, Babaláwo, Babalórìṣà, Ìyálórìṣà, Educators, Medical Directors, Dentists and Nurses (with Bachelors, Masters, Doctoral and other professional qualifications).

Ifá ni afinimọ̀nà ọmọ aráyé! Translation: Ifá is the one who guides inhabitants of the world onto their right paths. Contemporary Expression: Ifá is the GPS of life.

Our Philosophy of Education

Ifá University views the Sacred Scriptures of Odù Ifá as the primary means to a successful life. In its entirety, the educational and practical experience of the University is designed to enable students to know and understand the Odù of Ifá, to apply its content and belief in the Òrìṣà to every aspect of life, and to minister it effectively to the world. The University is founded upon, and shall forever be dedicated to, the declaration and preservation of the Odù of Ifá, Òrìṣà Religion, and academic excellence. The University is an Òrìṣà institution with the distinctive focus on the application of the Scared Odù Ifá principle of Ìwàpẹ̀lẹ́ to life and living.

Ifá University is a direct extension of Òrìṣà Spiritual Assembly and thus, adopts all of its beliefs. In order to qualify for any position at Ifá University (i.e., Board member, faculty, administration, staff, volunteers, etc.), individuals must, whole-heartedly, acknowledge and live by the following core beliefs: 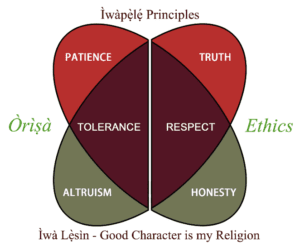 Consistent with our Vision, Mission, and Philosophy of Education, Ifá University is:

Please confirm you want to block this member.

You will no longer be able to:

Please note: This action will also remove this member from your connections and send a report to the site admin. Please allow a few minutes for this process to complete.

You have already reported this .